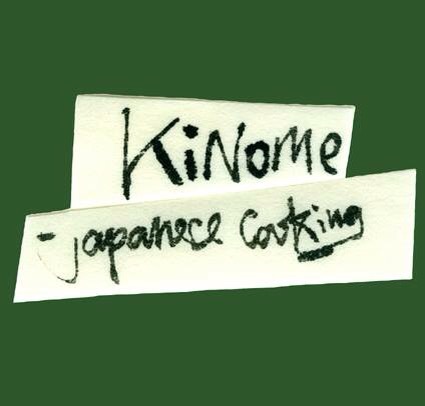 Japanese food is something quite rare in Birmingham, but is becoming more popular. For Vegetarians it has plenty of options, Nobu in London (Japanese and former Michelin Starred) a few years ago had a meat free cook book out, and its development into veggie friendly dishes has increased as people have become keen to eat less meat and fish. Traditionally there is a lot of vegetarian food in Japan, much of it from Buddhism. Tofu is an example as is Tempura (fried vegetables or herbaceous plants).

In January Kinome chef Sachiko Saeki did an evening at Vegetatian The Warehouse Cafe for Guardian newspaper members, which went down well, but good Japanese food is still quite hard to find in our city.

Things are begining to change though as Kinome Kitchen (aka Sachiko Saeki) is about to launch a Japanese Food culture pop up restaurant at The Kitchen Garden Cafe in Kings Heath. Begining on Saturday 2nd April and then on select dates through to June 30th, it gives an opportunity to try out something different with a chef who has worked in a Japanese Michelin Starred restaurant in Mayfair, London and with Hugh Fearnley Whitingstall where she featured in River Cottage Heroes.

In 2011 Sachiko’s trip to Koya-San, a Buddhist Temple complex in Japan, led to Shajan Ryari- vegetarian Buddhist Monk Food. It was these experiences that created the ideas for vegetarian dishes and attracted the production team of River Cottage and Hugh Fernley Whitingstall.

Kinome simply means spring buds. It is also a herb from the Sansho tree with a strong distinctive aroma. The Sansho tree is one of the traditional spice trees in Japan and every single part can be used for cooking in different ways. This use of the whole is typical of Japanese cooking methods.

Kinome Kitchen have a Spring Vegetarian menu for April and May that will be run alongside the meat and fish menu.

For £40 you can get 7 Courses of vegetarian Japanese food: Shajan-Ryari.

For full menus including non veggie see below:

For full dates see the poster below.

Expect to see Japanese Craft Beers on the menu too.

Be introduced to Japanese Food Culture.

I recently attended the launch of the Kinome Pop up at The Kitchen Garden Cafe in Kings Heath. Photos below. 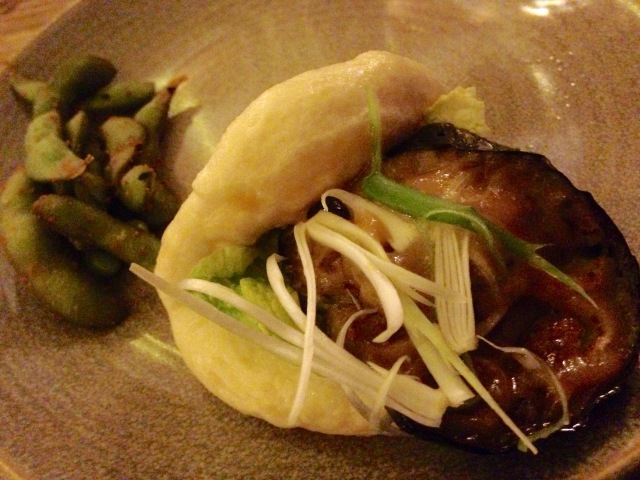 The food was informally presented, but constituted three different dishes. The first Vegetarian dish was the Aubergine and Miso Bao.

Served in a bao or bun (which was home made) the gently fried aubergine had the sweet and earthy flavour of the miso paste which gave it a delicious flavour. Beautiful. This came with Spicy Edamame (Soy beans in a pod) which had a contrasting salty flavour to the soy like miso.

This was followed by two Vegetarian skewers which like tempura were fried vegetables and came with a Tonkatsu sauce which is a vegetable and fruit based sauce often served with fried food. Both weed lively and whetted the appetite for more.

The third dish was a desert. The Strawberry Daifuku.

A traditional Springtime sweet sold by confectioners in Japan.

A soft, sweet whole strawberry encased by a soft and sweet paste was a match made in heaven. Exquisite.

The desert was Served with Maccha Green Tea (stoneground green tea) which was handmade in front of us, and tasted refreshing and full of lovely warming and healing flavours.

The tea ceremony centres on the prepetation, serving and drinking of Maccha. 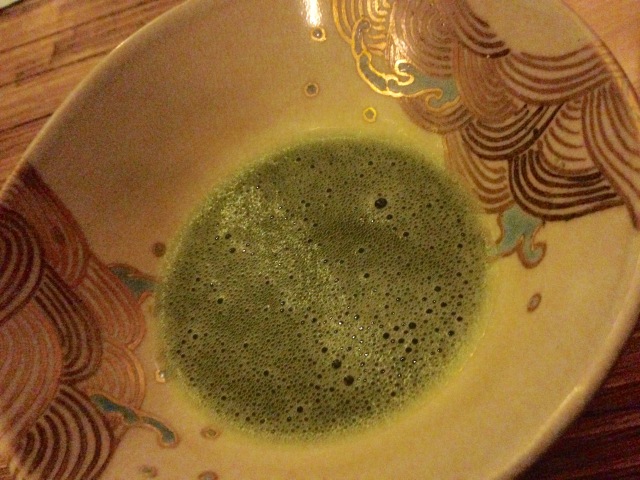 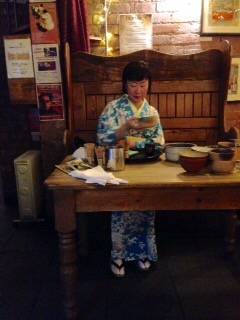 The Kinome pop up launch night was a major success and fully booked out. The food was beautifully made, presented and served with pride. The pop up is sure to be a culinary journey of Japanese food and I for one am very happy to return and continue my vegetarian Japanese food Culture journey.

Kinome Pop up restaurant is at The Kitchen Garden Cafe, Kings Heath, 17 York Road, B14 7SA.

The spring arrives with the sent of moss, suspended in the drizzle of rain is a sense of anticipation. In the Japanese traditional short poem called Haiku, Konome (the same character but pronounced differently) is the seasonal word for spring time. I see the English spring in there too.

She has also Worked with the Harborne Food school in Birmingham.