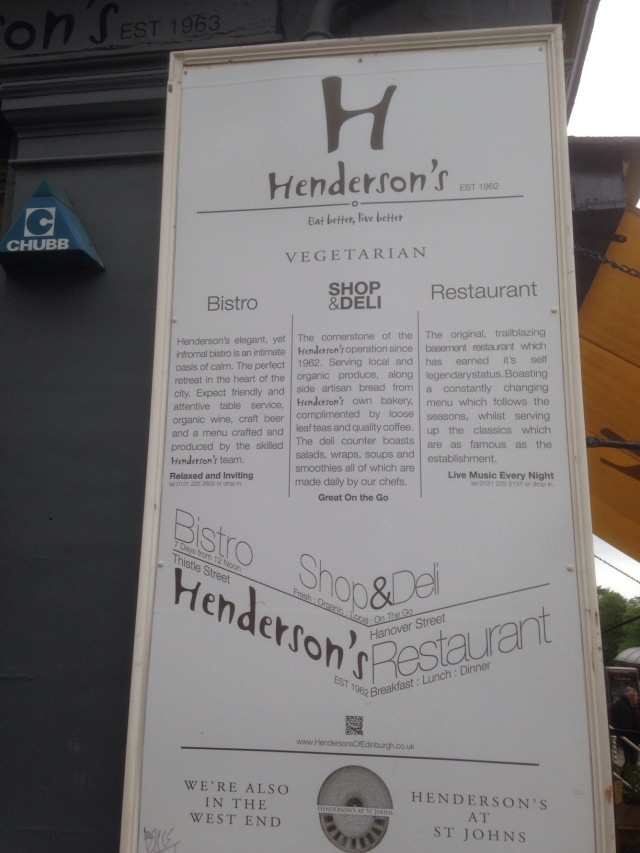 With its ancient crags and maze of medieval streets Edinburgh is a city that is no stranger to immortalised exposure. Its foodie scene is now renowned, with its garlanded Michelin stared restaurants and cosmopolitan buzz. All a far cry from when this veggie institution opened.

When in 1962 Henderson’s Vegetarian opened (yes 53 years ago) it couldn’t have realised that its lustre and ethos would still be as much of Edinburgh life as it is today. In 1962 it provided an outlet for the produce of Janet and Mac Henderson’s East Lothian farm and quickly became a restaurant and thus the story of evolvement into a bistro, a bakery, a deli and a gallery. A cultural hub.

The philosophy is the same. Eat better to live better and to serve delicious, wholesome food, using the best and freshest ingredients, and at affordable prices.

I’d been with Ruth to Edinburgh a few times over the years, but had never shamefully visited Henderson’s. So to redeem this uncalled for neglect lunch was required, on this our most recent visit a few weeks ago.

We visited their Hanover Street restaurant. The restaurant opens at 8am for breakfast and serves lunch, cake, afternoon tea or just drinks and snacks throughout the day. Its a popular stop off for Edinburgh shoppers in the New Town area, as well as those deserving workers who crave a vegetarian breather from their desks.

It’s buzzing basement space is set out like a canteen with the menu on a board behind the counter and huge salad table. You can also order hot food, and baked goods, wine and local craft beer.

Henderson’s provides over a dozen salads, freshly made, so this temptation was hard to resist. I’d heard they were to be had, and with a choice of salads which were varied and colourful.

You can choose up to four salads. So both of us chose four for little over £8. 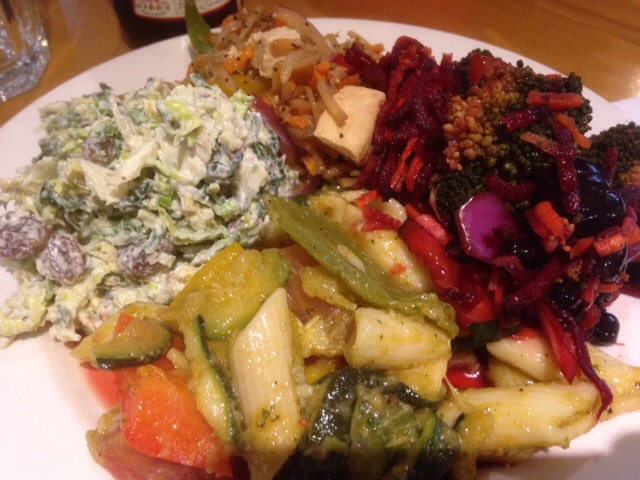 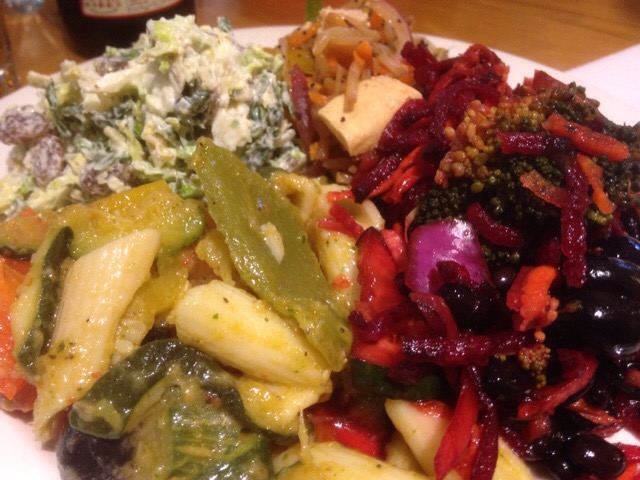 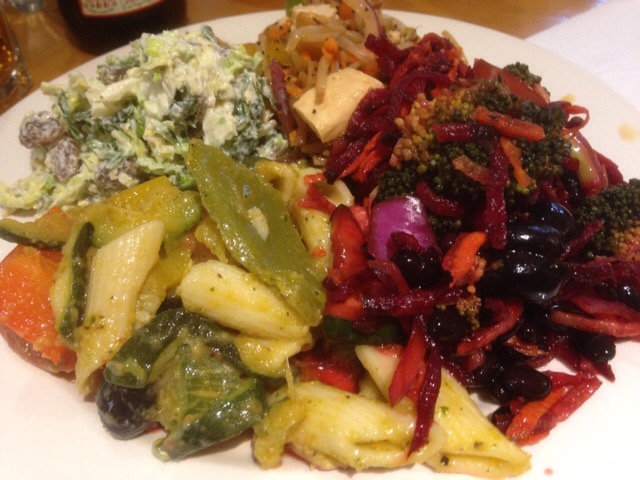 My salads included a beetroot based one, a pasta one, a Chinese stir fry noodles one and a Waldorf salad. The range of flavours of the four salads were zingy and they all complimented each other superbly. They proved quite filling, but in particular the pasta and stir fry were exceptional and healthy. Very impressive.

I also washed it down with a local  Innis and Gunn craft beer, which perfectly refreshed me, in preparation for Ruth’s shopping spree to follow. 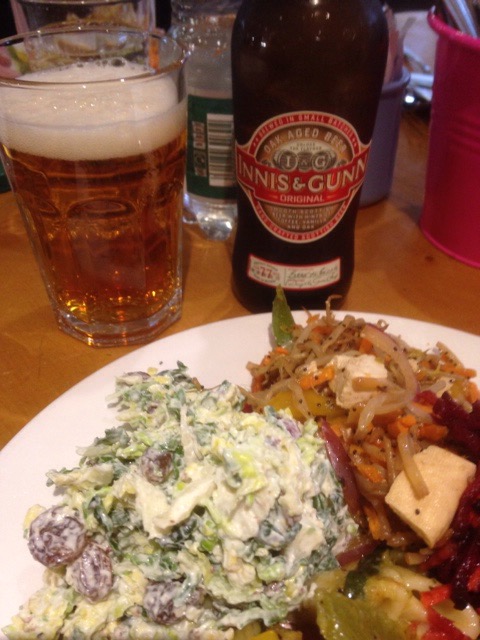 With its walls showcasing local artists and cool comforting atmosphere, Henderson’s is a smart choice for lunch. It’s a local institution, based on providing good healthy vegetarian food for a quick bite or respite from City life. In fact it reflects Edinburgh city life, it caters for veggies, vegans, and is popular with non veggies too, and creates a warm happy refresh in ones day. That’s how I saw it, a snapshot of a city, a hub in the New Town.

Don’t expect anything ground breaking, but just great healthy food, competitively priced, with a good range of dishes to cater for all requirements. Henderson’s reflects cosmopolitan Edinburgh, and if there is one place that I visited in Edinburgh for food over my 5 days that I would like to bring to Birmingham City centre it would be Henderson’s. It has that vibe, that community, that quick bite veggie food that is missing.

No trip to Edinburgh for vegetarians and vegans would be complete without a visit to this stalwart. It demonstrates that trends change in veggie food, but there’s always room for a Henderson’s. 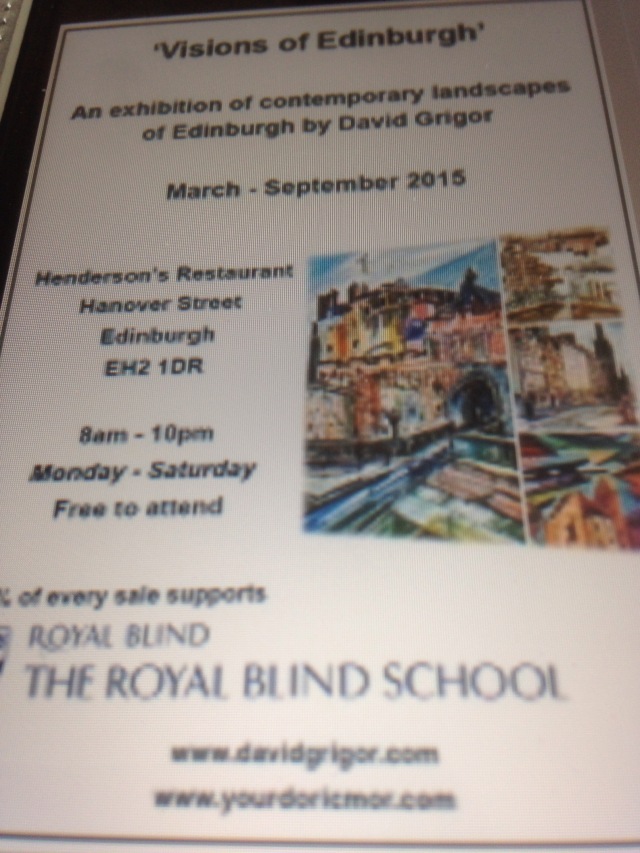 Above the restaurant on Hanover Street is the Henderson’s Deli, serving takeaways and deli goods. 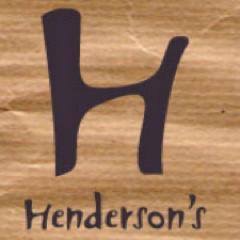 Above 2 Photos courtesy of Henderson’s.

We paid for our own food and drink in Henderson’s. My review and opinions are my own as always and honest. 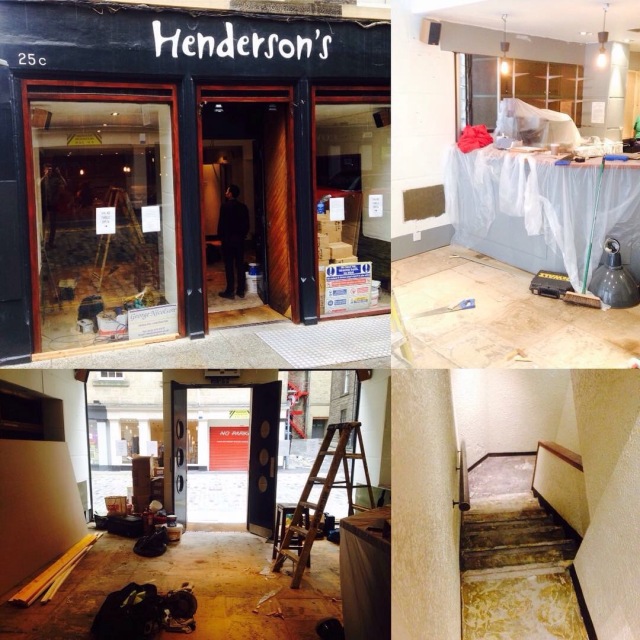 The Thistle Street premises is due to reopen on July 27th. As a purely vegan restaurant. 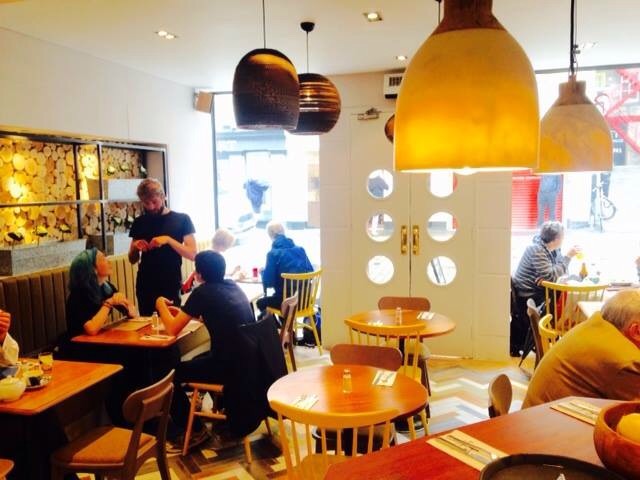 One thought on “Henderson’s of Edinburgh. A Vegetarian pioneer. ”