Three nice pieces to share about two of Birmingham’s finest Independent restaurants and two of the best places for Vegetarians to eat in the city,

Bar Opus based in the heart of Birmingham’s bustling Colmore Business District has appointed Carl Hawkins as its new general manager.

Born and raised in Birmingham, Carl has over 15 years’ experience as a ‘liquid chef’ working with some of Birmingham’s finest cocktail destinations. With a vast amount of experience in the bar industry, Carl was eager to join the Opus family and help catapult Bar Opus into the forefront of the Birmingham food and drink scene.

Carl previously worked for The Jekyll & Hyde pub where, under his leadership, it became a national finalist for “Best Spirit Pub” in 2013 and “Best Cocktail Menu” by Class Magazine in 2011. Carl is also one of the founders of the Birmingham Association of Bartenders and has been committed to cultivating the next generation of bartenders for over a decade.

Speaking of his appointment, Carl said: “I am excited to become a part of, what I consider, a legacy project. I believe that Bar Opus will become a Birmingham institution and will be here for many years to come. We will be bringing a contemporary technique to cocktail making that will keep customers coming back. Bar Opus will exceed expectations of what a cocktail bar in Birmingham should be and we will redefine the cocktail and dining experience”

Irene Allan, director at Opus, said: “Carl is creative and passionate about enhancing the bar experience. We are thrilled to have his expertise to help establish Bar Opus as one of Birmingham’s premier bars. Carl knows the ins and outs of the Birmingham bar scene and his leadership and skills will be essential to the bar’s success.”

Bar Opus is the sixth-month old bar addition to the Opus family, boasting a contemporary and modern landscape that will cement it as a city staple. Keeping with the Opus ethos, Bar Opus develops innovative food and cocktail menus, uses the freshest produce from the company’s range of British and strictly sustainable suppliers and engages with British spirit suppliers to create its inspiring cocktails.

A talented waitress at city-centre restaurant Opus at Cornwall Street, Gabriella Murea has achieved the celebrated Service Award at this year’s Royal Academy of Culinary Arts Annual Awards of Excellence.

The final, which took place on Saturday 16th May at Le Gavroche, London, saw Gabriella and 15 other finalists from some of the country’s finest restaurants and hotels serve a three course meal to two guests. As part of the service, Gabriella had to set up the table, decant and describe the wine, and fillet a dover sole in front of the diners. The awards, which have a high-profile judging panel, received an unprecedented number of entries and are designed to encourage young people within hospitality to achieve the highest possible standards in their profession.

Gabriella, 26, has worked at Opus for just over six months whilst studying hospitality and events management at University College Birmingham (UCB) and was the only finalist from the Midlands to be shortlisted for the award. Speaking about her achievement, she said: “I’m so happy to have passed and got my award. I prepared as much as I could for each stage of the process and it has really paid off. The standard was very high and I am delighted that the judges saw the quality of work that I can produce and felt it worthy of the award.”
Irene Allan, restaurant director at Opus restaurant, said: “This is such a fantastic achievement for Gabriella. She is an absolute perfectionist and always delivers superb service, so to have this award as recognition of that is a huge accomplishment. Pawel, our restaurant manager, has been an inspiring mentor for Gabriella and has supported all her hard work. We are committed to developing both our front of house and kitchen teams and encourage them to go for awards like this. Everyone at Opus is immensely proud of her and we’re privileged to have her working with us.”

This follows on from Opus at Cornwall Street promoting head chef Ben Ternent to Executive chef to replace David Colcombe who helped launch Opus a decade ago and had run its kitchens.

He will manage a team of eleven chefs and three kitchen porters at the groups three venues- Opus at Cornwall Street, Bar Opus and Cafe Opus at the Ikon Gallery in Brindley Place. He will help to develop menus and buy produce from the companies range of local and sustainable suppliers and continue to cook.

We wish him well, and hope that standards will be maintained. 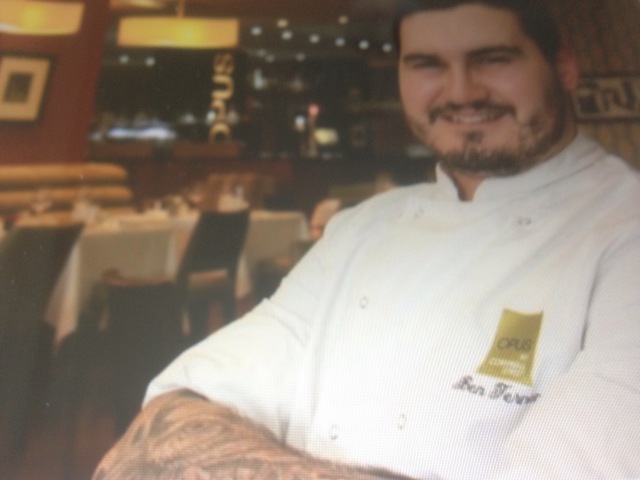 I can’t wait to see what he and his team cook up in the future, as vegetarian dishes are always worth tasting at Opus.

Thanks for reading
Andy 😊