The Station pub in Kings Heath underwent a refurbishment early in the year. Previously called the Sun at The Station, it’s now returned to its original name after been sold on.

For many years in Kings Heath’s history it was the pub closest to the now erased railway station that ran via Moseley from the city centre. Oh for its return. The train line is still there and caters for mostly freight trains, but the name of the pub has now returned to its rightful place as the first point of call on the High Street as you come in from the city via Moseley.

It’s a cosy local neighbourhood pub with a laid back feel with a large back room for events.

With a good selection of real ale, cocktails and friendly staff it makes a nice alternative to the Hare and Hounds and Fletchers Bar further down the High Street on York Road and it’s refurbishment does the style and age of the pub justice.

Ruth and I visited on a Sunday lunchtime in order to try out their Menu which includes a Veggie Nut Roast.

The Nut Roast came with lashings of Red wine gravy which is compulsory in my book and in many ways is a good test of the lunch. In this case the gravy was rich and punchy, though could have been a tad warmer.

The Nut Roast itself was lovely. Nicely textured, with a moist nutty feel that wasn’t over cooked or under flavoured in any way. It came with a huge Yorkshire pudding and mixed vegetables of carrots and peas and roasted potatoes. It was a good size Sunday lunch, and very enjoyable. 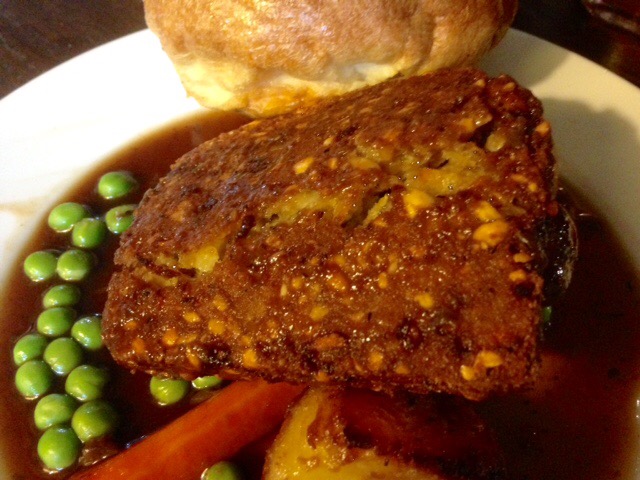 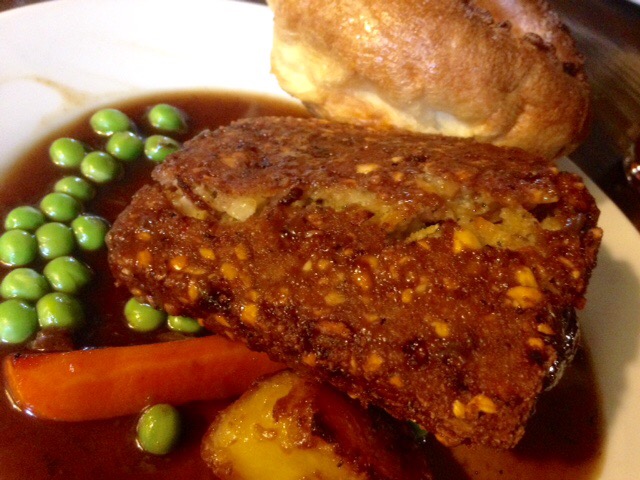 For pudding I  enjoyed an apple crumble with custard, which again was surprisingly good and in this case the custard was hot.

The Station in Kings Heath is a lovely suburban pub to visit. The Sunday Lunch menu is good value and with decent sized portions is a nice alternative in Kings Heath to curry, Italian and tapas. Outside their is a large beer garden which is comfortable and is a nice sun trap in the sunshine.

The vegetarian Nut Roast is to be recommended and was surprisingly full of flavour and depth and a decent choice for a roast in the area though not the best in the city by a long chalk. Well worth revisiting though for a straightforward hearty Sunday lunch in a cosy setting.

For a beer alone it’s worth a visit but stop for a bite to eat too, after all that trains not arriving for awhile.

The Station also puts on live music events  for up to 200 people and their back room can be hired out.

Sunday lunch is served from 12-6 every Sunday.

They also serve food all day and brunch. All meat and eggs are free range.

We paid for our meal in full.

The Plough in Harborne, in South Birmingham has a village feel and is filled with quirky independent details. It has a buzzy atmosphere and is well known by people in the know for its fresh homemade food, its Sunday Lunch and its coffee.

In fact it’s Sunday lunch has won the Times newspaper award for best Sunday Lunch in the region.

On a Sunday The Plough serves a Hearty brunch from 9am-12.30. Including a lovely looking vegetarian breakfast and numerous other veggie delights. The Sunday lunch is served from 1pm until they are gone. It is advisable to book as the restaurant was busy throughout our visit.

So it was for Sunday Lunch that Ruth and I ventured to The Plough.

For me-to try the the holy grail of vegetarian dishes-the vegetarian roast dinner.

The Plough has a homely industrial feel about it. The design adds character and a modern distressed look to the wooden furniture that has a rustic cared for look. I liked the decor, the quirky vintage, potted plants and funky signs. 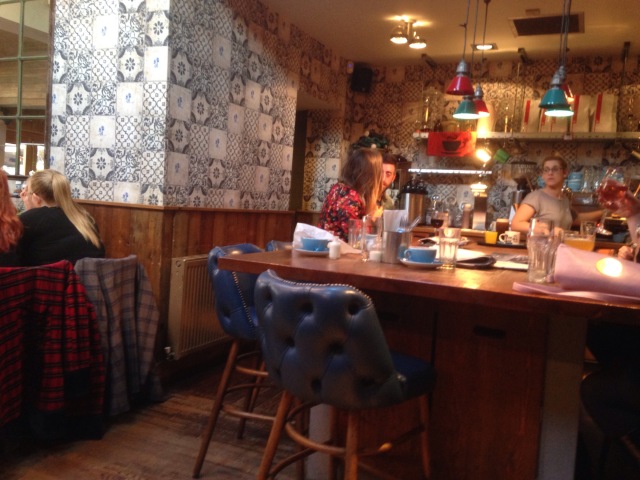 The Plough has been praised for its Sunday lunch menu, it’s popular judging by how busy the restaurant and bar was and also for its coffee in its own right. A destination for #Coffeetime itself.

For me the vegetarian Sunday roast contours up images of home cooked food, Christmases, and family gatherings. That Cosy feel, tempting aroma and warming taste.

Vegetarians often get bypassed on a Sunday. Restaurants and pubs, prefer wrongly to provide soggy pasta, or a bland mushroom risotto into veggie punters. An irritation not a discerning foodie in their own right. They don’t take the time to create and test a dish that will bring vegetarians in and send them home happy. Satisfied.

Not the Plough-no not The Plough.

Ruth and I were seated near to the coffee action centre as I call it. The coffee station, on going entertainment for me. An area of action.

We both chose the veggie starter.

It arrived Served on a wooden board, in a lovely sunny blue bowl, the green of the watercress on the blue. The flavours of the soup were spot on, the gentle peppery bite of the watercress packed a punch and made for a warming soup and a lovely starter, served with good homemade crusty bread. 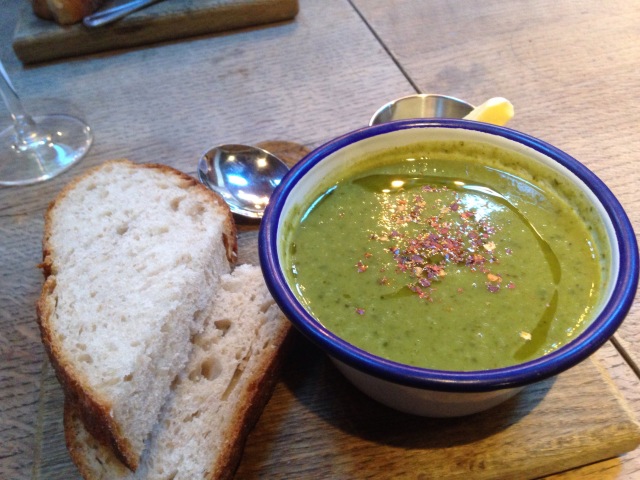 For her roast Ruth chose the Beef. Which she loved. A generous plate of food, that was a class above the average. 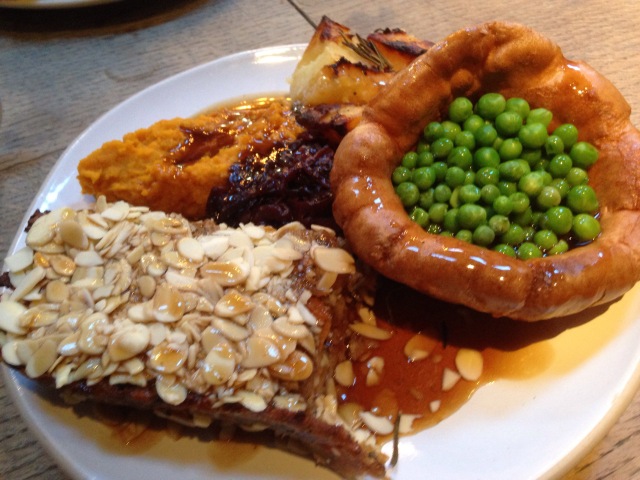 The roast looked stunning on arrival. A plate full of food. The Roast was delicious. The Apricot stuffing inside the outer crust of the roast, moist, subtle flavours, well seasoned and an element of harmony in the construction.

So many veggie roasts are overdone, overworked, and over flavoured. The Plough’s veggie roast was perfectly cooked, with the apricots adding a glamorous flavour that made the dish more exotic, enticing.

The best I’d had outside of my family home.

It was served with a creamy swede mash, and a delicious pea filled Yorkshire pudding and a braised red cabbage that was lovely, always a winner with me.

We both agreed to have a pudding, well it was Sunday.

Ruth chose the ice cream cone. Which we both thought was a cool vintage idea. She enjoyed her cone.

I ordered the fresh lemon and meringue cheesecake which though looked lovely was a disappointment when tasted. In part because their was too much biscuit and not enough lemon and meringue. The biscuit seemed unhappy being there, too cloying and not in proportion to the lemon which had a good flavour. A shame. 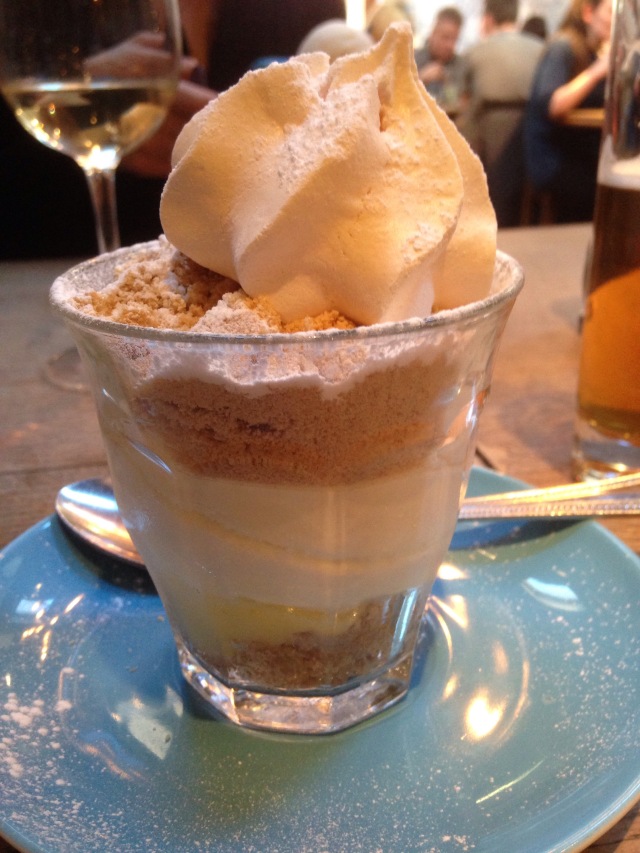 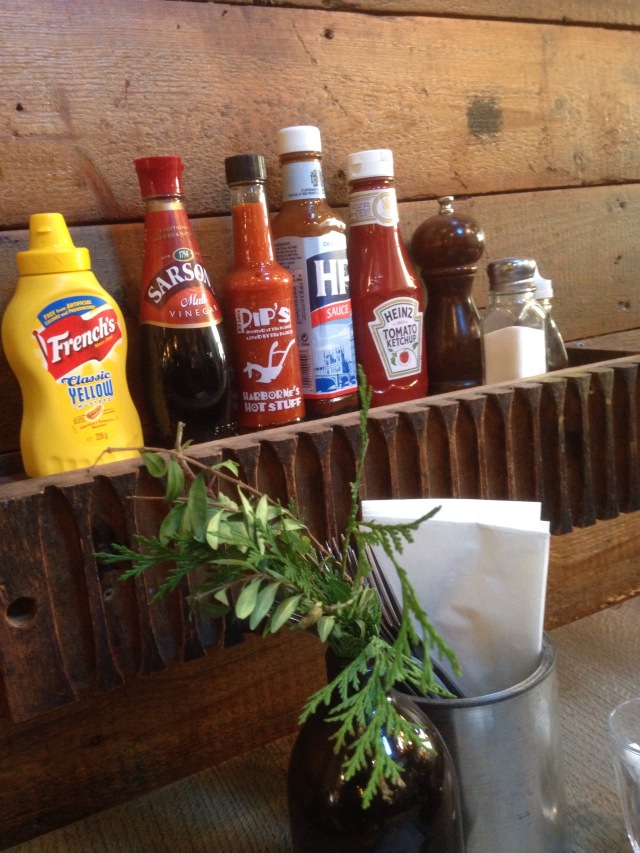 We both felt we should order some coffee as we were being enticed by the coffee station. Try some it kept saying.

We both ordered a double espresso. They packed a punch, both superbly made. I will be back to try more. 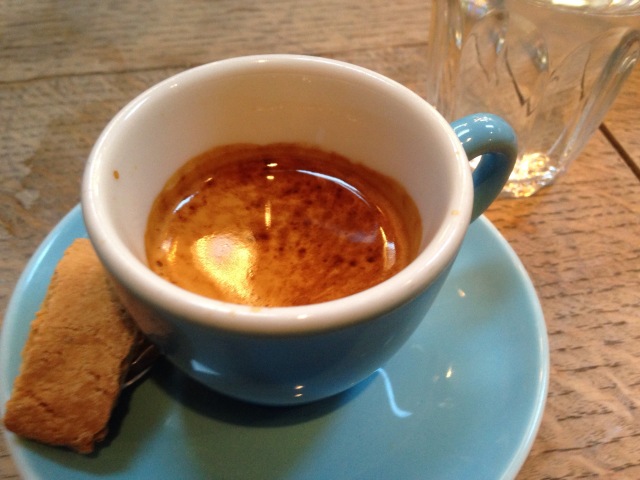 The Plough has recently introduced a new whisky list of rare and international Whiskies to compliment the large Scottish list they have already. It’s a stunningly large list. Very impressive.

I was advised to try the Swedish MackMyra single malt, so we ordered one of those and one of the complex Ardbeg 10 year single malt from the Islay region of Scotland. Which we shared.

The Ardbeg had a complex malty and peaty flavour that was exuberant and in your face, but for Islay lovers like ourselves its s great choice.

I didn’t realise Sweden made whisky so this was a treat. The MackMyra single Malt had a fresh nutty flavour, light in colour, with a lingering finish and slightly lemony. A nice gentle floral whisky and a lovely contrast to the peaty Ardbeg. Well recommended for something different.

We also drank two glasses of white wine and a pint and half of Purity ale.

The Plough was full of people in the know. The staff and service was charming throughout, young and enthusiastic and happy.

The plough gets pretty busy so booking on a Sunday is advised. The atmosphere was relaxed and friendly, a mixture of families with small children, families without children, couples and friend groups.

For my first Vegetarian Sunday Lunch review the Plough sets the standard and maybe won’t be beaten on quality, touch and care. It’s worth spending a bit more. It’s worthwhile in the Plough’s case.

The king of the veggie Sunday roast.

Kick back and try for yourself and take your meat eating friends and family too.

They will love it. 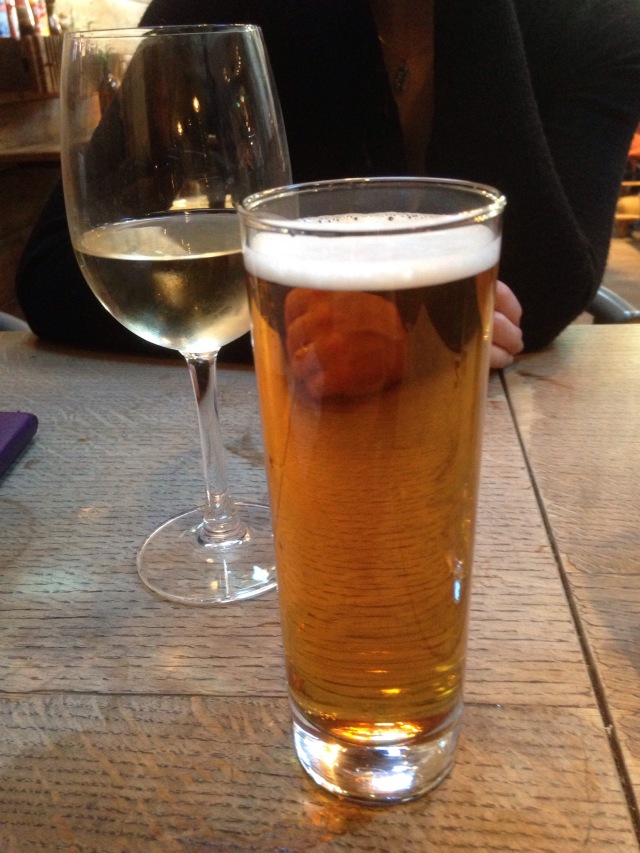 We were invited by The Plough Harborne as guests to try their Sunday Lunch menu. All food and drink was complimentary but I was not required to write a positive review. All opinions expressed are my own and honest as always.

Many thanks to Dan the restaurant manager for looking after us.

Has anyone had a good veggie Sunday lunch anywhere else? If its good then I will try and visit.

Have you tried the Plough Sunday lunch what did you think? 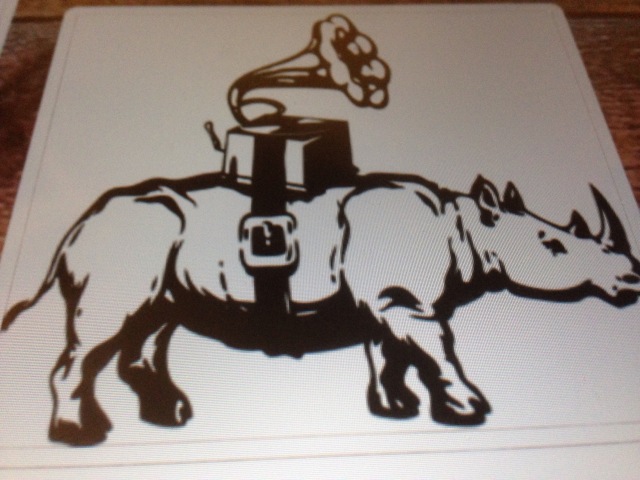